Skip to the content
home - Museums - Casabianca Museum
back to museums

The most extensive collection of graphics in an Italian museum: The Casabianca Museum is the place to meet with spontaneous expressions of artistic avant-garde of the years between 1960 and 1990, collected by Giobatta Meneguzzo. An open book for visitors, with over 1200 works by 700 artists. The Casabianca Museum is a permanent exhibition of graphic works of the '60s-'90s of the twentieth century, born as a museum/workshop and developed to become an archive, as a sign of being in constant motion. It is a museum, or more a staged exhibition performance, due to its ability to portray the context of contemporary art through the works of artists, captured in the immediacy of their production. The selection criteria dictated by the collector are the only interpretive access key transmitted to the visitor. The graphics, the multiple production of which par excellence, in this exhibitive context, reveals its entire matrix of uniqueness, witnessing occasions, meetings, trips. The material documentation represents here the synthesis of a particular event and a piece of a wider experience of collecting. The distinctive features of the exhibition are the concept of "full" and the absence of explanatory labels, under the banner of a free approach to works, as well as a free and intuitive route of their collection. More than 1,200 works by 700 artists, placed on walls and partly in containers on the table and on book stands, a for smooth and easy viewing, which works as turning the pages of an open book. The permanent exhibition is supplemented by a "warehouse" of a thousand graphic works in an art library of over 1,600 volumes of books and magazines. A warehouse dedicated to the work of the writer from Malo, Luigi Meneghello completes the corpus of Casabianca, spread over 780 square meters of floor space. 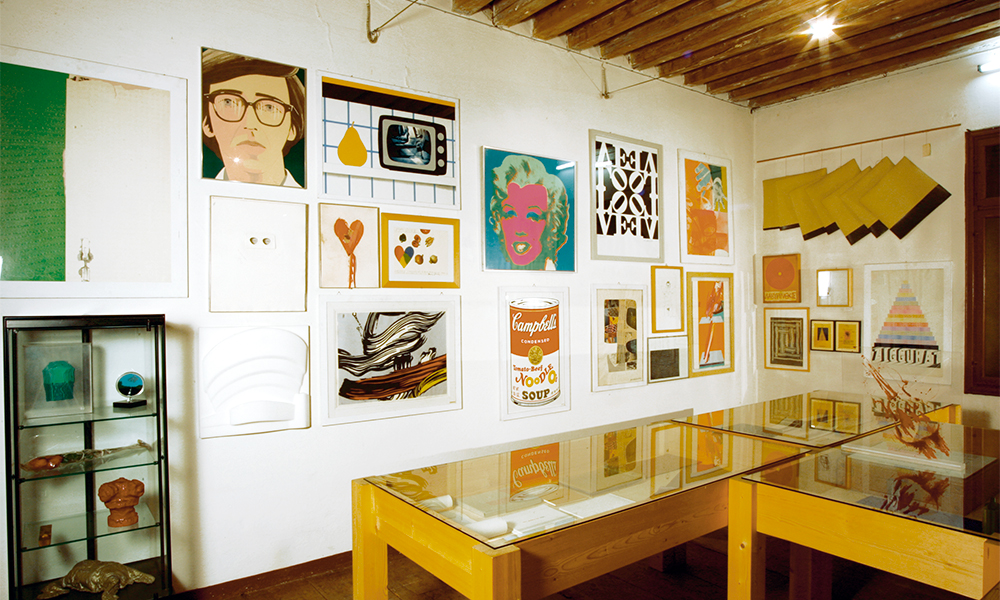 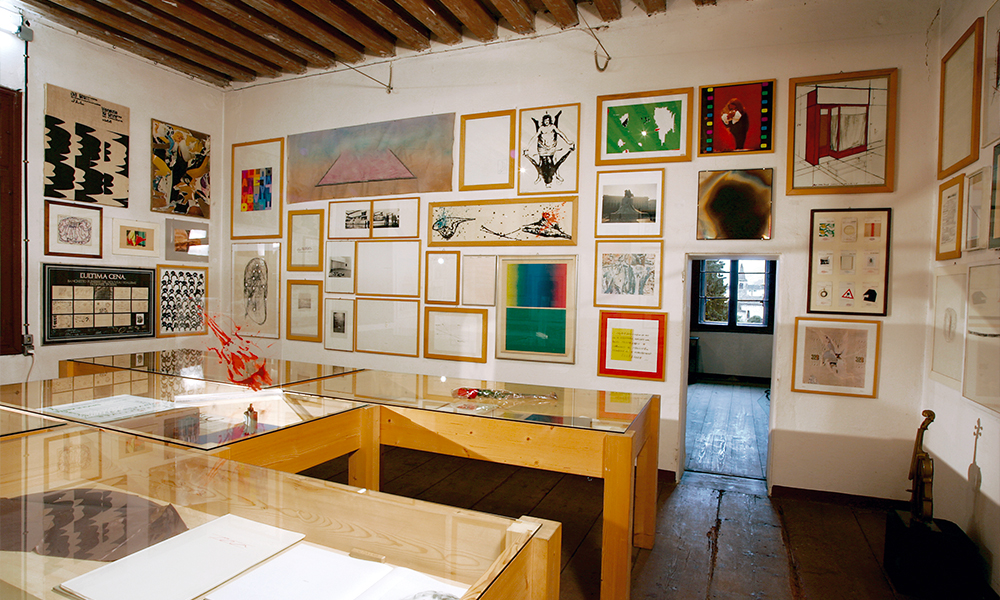 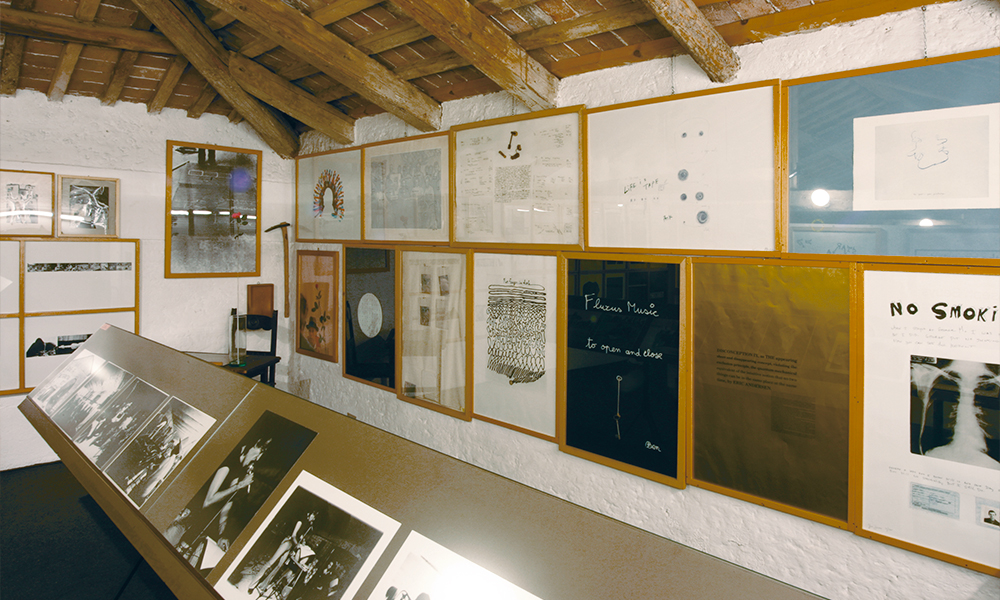 The visit
Walking through the halls you recreate the full picture of the development of the avant-garde art from the '60s to the '90s in Italy and abroad, through a corpus of work called the most extensive collection of graphics in an Italian museum. The amount of present works and the number of represented artists and currents, as well as timely and effective information are astonishing. It starts with works dating in the late '50s and early '60s, related to the latest developments of the informal, semiotic and material (Capogrossi, Turcato, Burri, Fontana), the research on surface/texture, either on a more pictorial side (Manzoni, Castellani, Accardi) or of the neo-structuralist or optical type (Morellet, Alviani, Uecker, Vigo, G.Colombo), up until the decidedly optical or kinetic expressions (De Marco, Vasarely, Le Parc). Some of these works and some of these authors (primarily Manzoni and Klein) introduce the complexity of the intricate developments of the '60s. Those years mark the beginning of that great overall effort of critical reading of the so-called "folk art" material, the pop-art, the language of mass media, which will affect, albeit in different measures, the European and American art, along with a new interest in collage, assemblage, and an overall revitalization of the Neo-Dada themes and modes of expression. Precisely that moment is one of the best documented by Casabianca, with works of the initiators of the pop climate (Johns, Rauschenberg, Dine, Warhol, Lichtenstein, Oldenburg, Rosenquist, Indiana, Segal, D'Arcangelo among the Americans; Hamilton, Tilson, Hockney and Jones among the British) with works of the artists belonging to the current of the New Realism (Klein, Christo, Rotella, Arman, Hains, Bertini, etc.) and of the Italian artists of the '60s, who developed in that climate (Angeli, Schifano, Festa, Ceroli, Plessi, Vedova, Gilardi, etc.). At the same time, the research on primary forms and on radical American abstract art is documented (Sol LeWitt, Morris, Ryman, Mangold on the one hand, and authors such as Stella, Marden and Tuttle on the other hand), which represented most rational and rigorous side of the artistic climate in the mid-'60s (with authors of various nationalities, such as Ben Vautier, Gilbert & George, Brecht, Chiari, Filliou); we finally approach the movements, which rose around 1968 in Europe and in America, of which we just mention the most important notions: the Poor Art (Anselmo, Penone, Zorio, Merz, Kounellis, Paolini, Fabro, Boetti, Calzolari, Pistoletto and artists of the opposite side, although their contemporaries, such as Piacentino and Nespolo); the Conceptual Art (Kosuth, Art Language, Venet ); the Land Art and the Earth Art and other post-minimalist expressions, typically American and Anglo-Saxon (Oppenheim, Kaltenbach, Hesse, Nauman among the Americans, Fulton and Long among the English). A large section is devoted to research, which used photography as a preferential mean over a period of time, from Mec Art to Narrative Art (Askevold, Beckley, Cumming, Hutchinson, Le Gac, Welch), through all analytic, descriptive or behavioural inquiries, which massively characterized the '70s (Parmiggiani, Patella, Vaccari, Ontani, Pisani, Zaza, Luthi, Wegman, Baldessarri), with a strong presence of the Fluxus group (Knizak, Higgins, Petterson) and the Viennese Actionism (Nitsch, Brus, Vostell, Muehl), as well as Beuys, the most complete artist of the second half of the twentieth century. There is also a wide review of the Visual Poetry (Sarenco, De Vree, Isgrò, Damen, Miccini, Carrega) and a section dedicated to Architecture and Design (Rossi, Mendini, Graves, Cantafora), followed by the movements of the Italian and foreign Transavantgarde (Paladino, Chia, Clemente, Fetting, Penck, Baechler), with the American graffitti (Toxic, Chalfant, A-One), and the experiments of the '90s (Cattelan, Arienti, Kaufmann, Galliani, Pusole, Nunzio, Mainolfi, Riello), which enables the Museum to present assumptions concerning the future along with the certainties of the past. One of the rooms of the museum is dedicated to the literary production of the writer from Malo, Luigi Meneghello, with a large collection of works, writings and studies published in various editions. Visits to the Museum are hosted by the collector himself or by a cultural worker.
The history
Close

The opening of the museum dates back to 1978, and was possible thanks to the offering of the building by the Morandi-Bonacossi family and the availability of the art collection of Giobatta Meneguzzo. The organization of exhibitions, conferences, debates, workshops, concerts and shows joins the permanent display. These are supplemented by the production of catalogues, books, booklets, copies and prints. All this has allowed for the creation of an archive important for the number of documents stored and for the importance of its content. The private collection of contemporary art focuses on the discipline of graphic design, in a display of strong identity created by the collector himself since 1978.

The building of Casabianca, dated between 1668 and 1700, is located in the axis of the express road of Malo, in an immediately obvious location. Its solid compact and essential mass denotes the original function as a place of gathering, processing and storage of agricultural produce of the Montecio estate. The appearance and type of the Casabianca building, however, reveal the traits of a noble conception and gentile design, which can be deduced from the vaulted ceilings in the rooms of the ground floor, from the large hall on the first floor, faced by other rooms, from the vicinity of characteristic heavy pillars, regular and of good quality. The name “Casabianca” derives from its original covering in Marmorina, of which, unfortunately, only traces remain nowadays.