Skip to the content
home - Museums - Jacquard Garden
back to museums

The Jacquard Garden is a beautiful historic, late romantic garden, situated opposite the former woollen mill of Francesco Rossi and, in the past, destined to accommodate functional structures close to the factory, such as drying rooms and drying racks for woollen clothes, and the old Jacquard Weaving plant. The name of the garden derives from the annexed theatre, dedicated to Joseph-Marie Jacquard, French artisan and perfector of looms, which bear his name and which enabled him to perform complex designs on fabrics. Dating back to the second half of 1800s, the Garden, designed by Antonio Caregaro Negrin, inherits the classic works and landscaping reworked with an eclectic style, which combines geometric elements of the formal garden with free landscaping forms. Another important component found here is the interest in botanical sciences, as evidenced by the wealth of tree species, with exotic and colourful plants arranged apparently at random, accompanied by plants of curious geometric shapes, which create a harmonious encounter - clash between different forms of expression. This extraordinary garden offers its original landscape elements, as well as important evidence in terms of industrial archaeology. Its location, on a natural and gentle slope, offers picturesque views from any side you look at it. 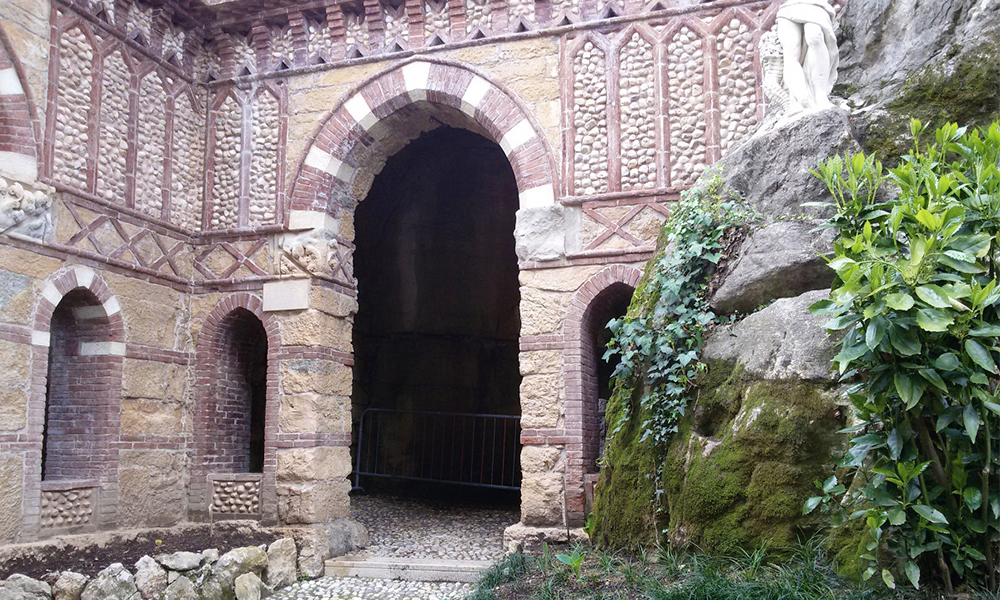 The visit
With its unique versatility and richness of exotic tree species, the Jacquard Garden, designed by architect Antonio Caregaro Negrin, is truly an interesting expression of Venetian culture and of the culture of the European late nineteenth century. The entrance to the Garden opens in axis with the monumental door of the Tuscan gate of the woollen mill of Francesco Rossi, to emphasize the link of the site with the factory. The elegant gate, flanked by four octagonal pillars topped with lanterns, is adorned with floral decorations gathered in the grating placed in the original high wall. At the base, there is a stone seat used by workers waiting to enter various departments of the plant. The other sides of the site retain high walls in brick and stone, decorated with geometric motifs, typical of gardens designed by architect Caregaro Negrin. To the left of the gate stands the canopy for the workers, built by engineer. E. L . Pergameni in 1878, on a part of the area previously occupied by the Jacquard Weaving section. The building has three equal sides and, in a niche in the Lombard style, contains the marble bust of Francesco Rossi (by F. Groggia) dedicated to him by his son Alexander in 1861. Opposite the entrance the bronze statue of Alexander Rossi welcomes the visitors. Further to the right there is a fountain, now planted with roses. Close to the fence, between flower beds with rocks, you can see a magnolia soulangeana and a libocedrus. Continuing on the left side of the avenue there is a palm tree, surrounded with roses, while other plant specimens dot the meadow among the great bustle in the middle of the yard. On the right, towards the south-east, the garden is enclosed by the spectacular building of the Jacquard Theatre, whose façade is adorned with twelve terracotta medallions, designed by Gian Battista Boni and depicting famous personalities, who shaped the city's history. Next, on a pedestal in the shape of a palm trunk, there is the stone bust of Sebastiano Bologna, the founding partner of the mill of Francesco Rossi. Nearby, close to the mountain, you can see an evergreen redwood and a large Portuguese cypress. Continuing to the left, the sinuous, warm and moist greenhouse appears in all its beauty, which is the cornerstone of the Garden, the first wing for those who come from the outside and a portal introducing the system of further fountains, caves and trails. At the centre of the semi-circular roof, jutting out in front of the greenhouse, originally there was a statue of Flora, and later, until the restoration in the 1990s, an aviary from 1800s made of iron and zinc. On the back of the greenhouse, opens the most amazing part of the garden, with intricate paths through rocks, caves and neo-Gothic architecture, culminating with the reconstruction of the ruins of the castle of Schio, which extends up to the top of the hill with a bridge and a viewpoint overlooking the Rossi Wool Mill and the nineteenth-century city. The extreme background of the Garden is the sixteenth-century church of San Rocco, outside the garden fence, where the Caregaro Negrin adds the neo-Gothic bell tower to emphasize the upward development of the garden. It is also the focal point of the spectacular staircase of San Rocco with the park of the Castle. Coming down from the terraced gardens to the north-west side, the head of a crocodile appears at the side of a cave, while on the other side stands the octagonal tower, flanked by two large Photinias. From here you can take two paths, one goes alongside the fence and starts with an evergreen redwood, the other, more central, is marked by a grove of yews. The alleys continue coupled further among privet, hackberry and magnolia, accompanying the visitor to the exit.
The history
Close

A partire dal 1860 – durante la fase di rinnovamento urbanistico della città promossa da Alessandro Rossi – si assiste anche alla sistemazione dell’area di fronte al Lanificio Francesco Rossi, trasformata in un magnifico giardino: l’architetto Antonio Caregaro Negrin (1821 – 1898) ha saputo abilmente inserire nuovi elementi a quanto già esistente nel contesto: le due case d’angolo rivolte verso l’attuale via Pasubio, la torretta ottagonale con tetto a pagoda e la cinquecentesca chiesetta di San Rocco. Un tempo la torretta chiudeva la tessitura ed era destinata a contenere i “pisciatoj”, in base alla pratica di utilizzare l’urina nel processo di lavorazione della lana per la sua forte percentuale di ammoniaca; fu trasformata poi in torre uccelliera seguendo i canoni tradizionali della villa rurale veneta.
Starting from 1860 – during the renovation promoted by Alessandro Rossi – the arrangement of the area in front of the Francesco Rossi Mill is introduced, which is then transformed into a beautiful late romantic garden by architect Antonio Caregaro Negrin, who had been able to ably insert new elements to what already existed in that space: the two houses on the corner facing the present via Pasubio, the octagonal tower with a pagoda roof and the sixteenth-century church of San Rocco. At one time the tower was a place where textiles were kept, and it was intended to contain the “pisciatoj” according to the practice of using urine in the process of working wool for its high percentage of ammonia, and was then transformed into an aviary tower following the traditional rules of a rural Venetian villa.

From the beginning of their acquaintance, Alessandro Rossi and architect Negrin, whose formation took place by the most prestigious nineteenth-century landscape masters such as Giuseppe Jappelli and Francesco Bagnara, demonstrate a deep intellectual and professional affinity; no coincidence that the two worked together for over 40 years, starting with the Jacquard Garden and coming to a climax with the Workers Neighbourhood of 1872 and the redesign of the Cathedral and the square in front of it in 1877-1879.

Over a period of twenty years, Negrin, combining stylistic experiences and traditions, created the extraordinary design of the Jacquard Garden: happily adapted within the particular orographic area, well placed in the area of industrial development surrounding, and having significant recreational functions for the new community of textile workers. For them, there was in fact a building converted, which restricts the right side of the garden. It was transformed into a working men’s club and a theatre room, which could accommodate up to eight hundred spectators.